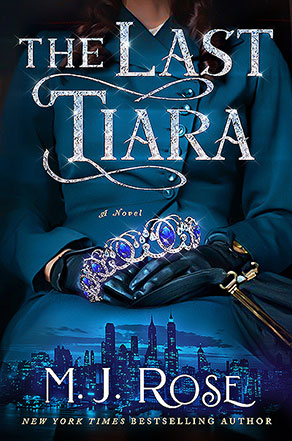 "Isobelle, listen," she whispers. "It's time. I need to tell you about my last evening on this Earth and the days and nights leading up to it. Honor must be paid. Justice must be done."

She watches her daughter shift in her sleep, not knowing if she can hear her, but Sophia continues, nonetheless.

"I was standing on the corner when I saw him. Was it possible it really was him? With the snow falling so heavily, I couldn't be sure. Then he hunched up his shoulders the way I remembered, and I was certain. He always stood as if he was uncomfortable.

"I shivered. From the cold. Or the memory. Or perhaps both. Just like that, while standing on the corner of Madison Avenue, I was suddenly catapulted back in time to St. Petersburg more than twenty-five years before, to the last time I saw him. Over two decades had passed. Lifetimes lived. Loves lost. Treachery and death stood between us. And there he was.

"After all that I had endured and dealt with and survived, how was it possible that we were one crosswalk away from each other? And in the snow? As if nature herself was playing a game with us."

For this last year, Sophia has missed touching her daughter's hair, kissing her cheek. Although she has no corporeal presence, she reaches out and tries to smooth down Isobelle's ebony waves. Nothing happens. She tries harder. A single curl settles. Sophia sighs, feeling a deep satisfaction, and continues.

"He didn't see me. Even though he stood right across from our house. Even though he was staring at our building. Even though he had to be headed my way, looking for me. I've told you so many times, I never believed in coincidences. After all those years, he could not just happen to be there.

"I stepped off the curb to cross to him, so preoccupied with keeping my eyes on him that I didn't see the car. Or because of the swirling snow, the car didn't see me. I heard a screech. I felt a sudden jolt. Then pain. Everything was suddenly quiet. Like those winter nights in Russia when it seemed the snow muffled every sound in the whole world, and all I could hear was my own breath...and your father's.

"As I lay there on the pavement, I realized with an urgency as terrible as the pain, that I should have told you our story long before. Instead of waiting for a time when I felt strong enough to face those memories. I shouldn't have kept them buried in that secret city deep inside of me. But sharing them would have meant suffering it all over again. The longing. The guilt. And greatest of all, the loss.

"So, I left you with a mystery. And I fear, not enough clues to help you solve it. My story is one of Mother Russia and its demise. Of the war and the tsar and tsarina and their daughters and their fortunes. Of the holy men and the psychics and the Bolsheviks and their revolution that came and wiped out everything we knew. Of starving and stealing. Of pity, pathos, and desperation. The story of your heritage and your influences — all the things I could never bring myself to share with you before because it is such a tale of sorrow. And my darling Isobelle, I wanted you to have only sunshine and joy. And because, even in New York, far away from the onion domes and frozen Neva and the terror, here in this land of freedom and hope, my fear controlled me.

"I wish you could have known your father. You are so like him. Your aristocratic features, your height, your jet-black hair, and storm cloud gray eyes. They all come from him. Even without his influence, you've inherited so much from him — your curiosity, your willingness to meet a challenge head on. The way you remain determined despite your fears, even to the point of being stubborn. Most of all, I see him in the way you believe there is always a solution. Nothing ever broke your father, and I hope nothing will ever break you.

"Isobelle, can you hear any of this? It's important. It's time. You need to know that once your father risked his life to provide an insurance policy to protect us. But instead left us with a curse responsible for our separation and death. First his. Then mine. And now, you are about to discover it, and you will have to deal with it. What will you think, you curious darling? You determined soul.

"I should have answered your questions when you asked them instead of brushing them off with a wave of my hand and a curt caution that we can never go back, so why do you need to know?

"I was so wrong, my darling Isobelle. You did need to know. And now, you need to find out why this thing mattered so much. Why so many years later, the truth about it is worth hunting down. Why your father begged me to never let it leave my possession. Why something that was once thought to be so valuable proved to be nothing but glass, so easily broken. Like our dreams."